20 hours, 5 minutes ago
Thanks to funding from this office the Police Enquiry Office is now open six days a week. You can now speak to an O… https://t.co/yVho0BPDe1
Follow us

On this page you will find information and results relating to polls and surveys conducted by the Office of the Police and Crime Commissioner as the Commissioner has sought the views of the public to aid decision making.

A survey run by the OPCC over a two-week period from December 23, 2021 to January 9, 2022 collected 5,316 responses from members of the public. You can see the results which are set set against responses from two focus groups made up of Devon and Cornwall residents here.

The aim of Commissioner Hernandez launching her annual policing survey was to survey a representative sample of residents on their views and experiences of policing in their communities. Collecting information in this way would enable any commissioner to inform the next Police and Crime Plan and assist with decision making related to the 2021/22 policing and commissioning budgets.

Because of the Covid-19 pandemic the face-to-face engagement used to promote surveys and polls of previous years was not possible so there was a greater reliance on using traditional media, social media and email newsletters to engage participants.

The full reults can be found here. 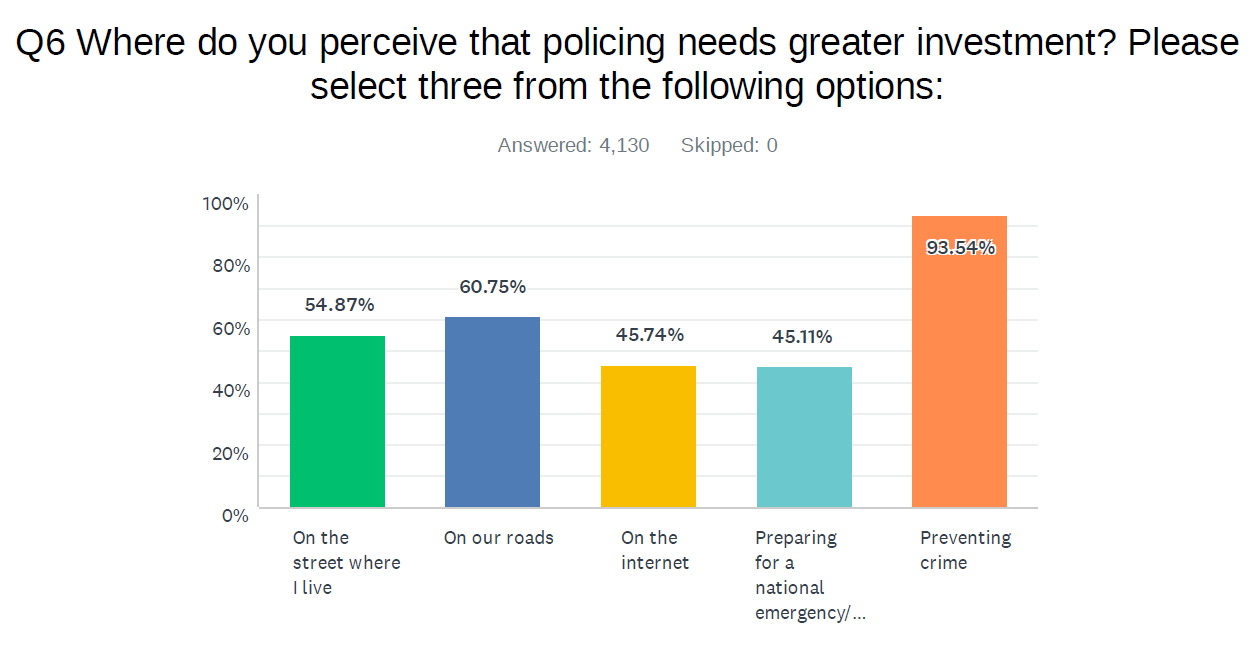 The Association of Police and Crime Commissioners (APCC) launched a national survey to seek views on road safety and enforcement and to inform a submission to the Department for Transport’s Call for Evidence on roads policing. 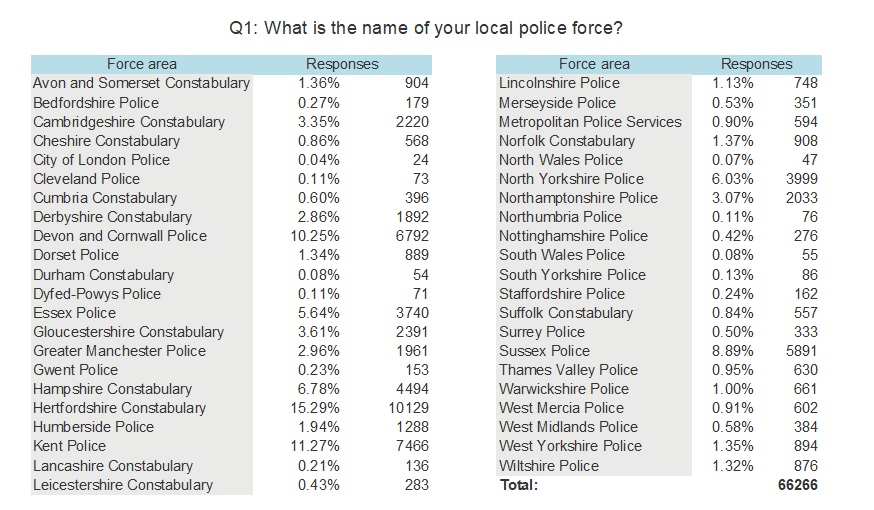 At 37 events across Devon and Cornwall and online, the OPCC communications and engagement team asked the public what their spending priorities for policing would be. They gave members of the public three coins/votes each and asked them the following:

"To feel safer, I would like more policing..." with the answer options of in my neighbourhood; on the internet; on the roads; on preventing crime; preparing for national emergency and other.

Results were as follows:

The PCC conducted an online survey asking members of the public whether they would support a 'pay more to get more' approach to policing. The survey consisted of questions tailored for each property banding noting how much the increase would be for them.

A total of 4,617 people took part in a precept poll and results indicated there was support, with 54% voting in favour of the additional investment if it was devoted to frontline officers.

A total of 2,680 people took part in the online survey run by the PCC relating to speeding. The results show overwhelming support for more stringent enforcement of road traffic laws (85% in favour), stiffer penalties for those caught speeding (80% in favour) and for a proportion of the money from fines to come locally for road safety initiatives and enforcement (88% in favour).

"Which two of the following are of the biggest concern to you?" with the answer options of road condition; speeding; distraction driving (including mobile phone use); drink/drug driving; inexperienced motorists on rural roads and other.

Approximately 5,122 people took part in the coin drop with distraction driving (including mobile use) coming out on top with 58%, closely followed by drink/drug driving with 53%.

The chief constables of Devon & Cornwall Police and Dorset Police with both PCCs conducted a survey to explore the possibility of merging the two forces. Please vist the Future Policing website for more information about the merger and the survey results.

The PCC asked the public through a policing precept poll whether they think policing in Devon and Cornwall requires more investment and whether they would be prepared to pay an additional £1 per month to support policing.

Out of the 4,109 individuals who took part, 87% believed that our police force needs more investment and 71% said they would be willing to pay an additional £1 per month for local policing.