Police and Crime Commissioner Tony Hogg is to ask homeowners in Devon and Cornwall to pay an extra 6.5p a week* to ensure that policing resources can be maintained in the region.

Mr Hogg will ask his scrutiny body, the Police and Crime Panel (PCP), to agree the 1.99 per cent increase for 2016-17 when it meets on Friday 5 February.

If confirmed, this would be an increase of £3.37* a year for Band D homeowners and provide around £1.8m annually to protect and enhance policing services.

*The Police and Crime Panel have now confirmed the precept rise.*

“In November the Government made the welcome decision to lessen the level of cuts the police face in coming years but that still left a  reduction in grant income of 0.6 per cent,” said Mr Hogg.

“In cash terms this is a cut of around £1m next year but, with additional increased costs, the shortfall after tax base-changes is closer to £1.8m - the revenue from an increased council tax will cancel that out.

“Just last week we saw that recorded crime continues to fall and I applaud all those officers and staff who have made this happen in the face of unprecedented cuts.

“But crime accounts for only 20 per cent of police work and the demand on services continues to grow.

“Efficiency and value for money remain at the heart of my financial plan and significant savings still need to be made. Since 2009 we have delivered over £58m savings and an additional £13m is still to be found over the next four years.

“The strategic alliance with Dorset police and ever greater collaboration with local partners and other blue light services will help meet this target.

“Work continues to identify further savings and target more funds at priority areas that are important to communities, but any fall in income has an obvious effect on the police’s ability to operate at the front line and keep the people of Devon and Cornwall safe and secure.” 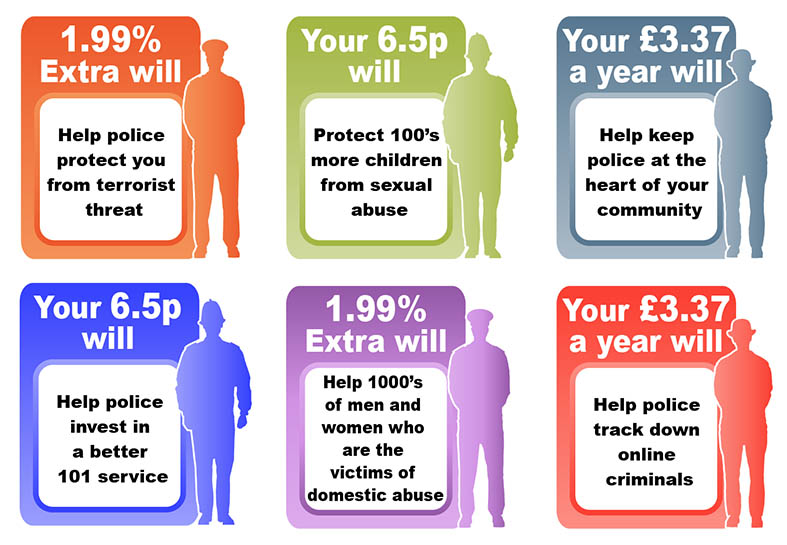 While recorded crime may be falling – demand for police services is not.  The police needs to improve capacity and services in many areas, including safeguarding and firearms. If the precept rise does not happen there will be 75 fewer officers devoted to priority areas. From discussions throughout the year the PCC believes the vast majority of the public are content to pay an additional £3.37 a year.

2.    We continue to face considerable uncertainty over our long term funding as the Government has still not made its intentions clear on the revisions to the funding formula.

Last year the Government was on the verge of removing £15m from the budget of Devon and Cornwall police.  The shape and impact of any revised proposals on Devon and Cornwall is not yet known.  While we will continue to push hard for a fair funding formula that reflects key issues such as rurality and tourism we must be cautious in our financial planning.  If the Government returns to its previous proposals then we may need to find considerable extra savings.

3.    To provide the necessary resources to allow the police to do their job efficiently and effectively.

This money will allow additional investment to be made in priority areas reducing the risk of child sexual abuse (CSE), terrorist actions and generally providing better protection for the most vulnerable in our society.

4.    There has been a clear steer from the Government that police budgets must have real term protection to meet the range of threats we face in today’s society and this is only possible with an increase to the precept.

The Home Secretary built this assumption into her settlement in November. She wrote:

“The chancellor and I have agreed a fair deal for the police. This settlement gives you immediate certainty that police spending will be protected in real terms over the spending review period, when local income is taken into account. Taking into account the scope that you have to raise local council tax, this means a flat real settlement for policing as a whole.”

Much of police technology remains in the dark ages compared to industry partners. The PCC is frustrated that he will leave office with the technology that supports police operations still not fully “fit for purpose”.  For example, we can invest in ensuring that our 101 service meets the expectations of what a modern police service should provide.

The actual increase will depend on your council tax band as shown in the table below: