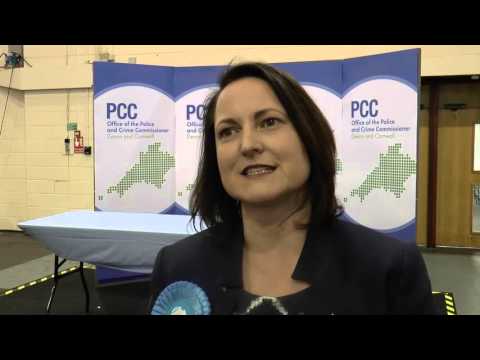 She won with a majority of 3,794 over Gareth Derrick (Labour) after the second round of voting*.

Alison will officially take over from Tony Hogg on 12 May. Her term of office will last four years.

“I am delighted to have been elected as police and crime commissioner by the people of Devon, Cornwall and the Isles of Scilly,” she said.

“It has been a very close election and I congratulate my opponents, particularly Gareth, on what has been a hard fought campaign.

“But when it came to voting I am pleased that the majority of people agreed with my priorities which are, getting the best financial deal from Government for policing in Devon and Cornwall, maintaining a uniformed visible presence on our streets, helping people to stay safe online and support for victims.

“I also aim to review the closure of police stations and to improve crime reporting through the 101 service.”

She also took the opportunity to comment on recent allegations surrounding electoral expenses.

“I have not been approached by the police or other agencies about this matter,” she said.

“I stand ready to assist with any enquiries that the police or any other agency wish to make.

“At my request the chief executive has put in place arrangements that I will have no contact with the chief constable or any officer from Devon and Cornwall in relation to this matter.”

Watch video interview with Alison below.