3 hours, 48 minutes ago
RT @Assistant Chief Constable Nikki Leaper: Today I welcomed 15 student officers as they attested as Constables to serve the local communities. Later I had the… https://t.co/K01z337tR9
Follow us

Partners from around the South West came together last week to bid a fond farewell to departing Chief Constable Shaun Sawyer QPM. 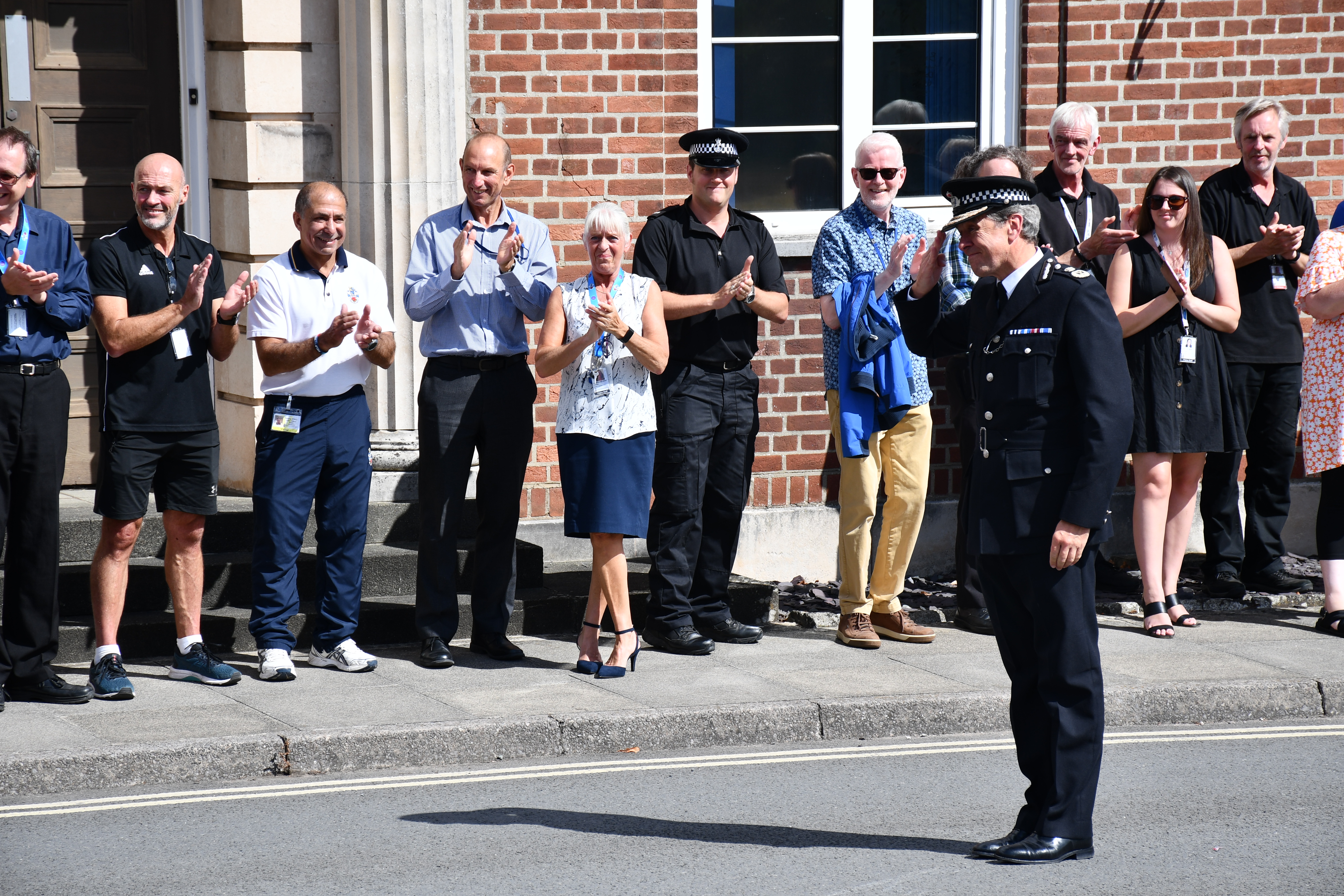 Mr Sawyer has been in Devon and Cornwall for more than a decade in an era when the National Police Chiefs Council tells us that the average tenure for his post is a little over three and a half year – and at the time of his departure he was the longest-serving officer to hold that rank in the country.

In his time at the top policing has changed significantly. When he joined Devon and Cornwall Police as Deputy in 2010 some crime types, particularly those around vulnerability, were far less well understood.

Crime and crime types continually evolve. The growth of smartphones and IT have substantially changed the nature of crime and the range of victims.

Young children exploited by drug dealers to carry and deal dangerous drugs are now less likely to be treated as criminals and offered the protection they need, while we work in collaboration with other forces to track down the real offenders who put them and our communities at risk.

Technology has brought about a whole host of opportunities and challenges. While cyber crime has increased in frequency to the point where most of us are at risk of becoming victims, the introduction of drone flying teams and body worn video provides evidence and search capabilities that officers of previous generations would never have dreamed of.

Under his leadership Devon and Cornwall Police has been far from the sleepy backwater that other more metropolitan forces might have considered it to be.

Our unique challenges of rurality and isolation required fresh thinking. It was under Shaun’s leadership that drone teams were pioneered. Collaborative working with fire and ambulance services created the country’s first Tri Service Safety Officers and Community Responders to create a blue light resource in communities that would otherwise have had none.

Mr Sawyer made a significant impact on the wider policing of the UK through his leadership of the Modern Slavery and Organised immigration Crime portfolio, another area of crime that was poorly understood and responded to in 2010. Understanding the vital importance of engaging young people he also drove the development of the Volunteer Police Cadets, and latterly through the NPCC leadership of national policing performance.

Together we have navigated many significant issues which have affected our public, including the exploration of a merged force with Dorset Police; the construction of the new Exeter Police Station as the most environmentally sustainable police building in England, developing an innovative prevention of serious violence approach; and more recently in the dealing with the tragic events relating to the murders in Keyham, Plymouth.

He has always been able to judge the mood of our communities and engender the right ethos and philosophy in responding to large scale events. The way in which Devon and Cornwall Police prepared and responded to policing last year’s G7 summit in Carbis Bay, Cornwall, was outstanding.

For the duration of the event we were the largest police force in the UK with the number of officers we hosted here on mutual aid, and despite the lack of clarity from multiple countries and uncertainty and last minute changes from central government, the royal household and participating countries the event was a resounding success, with little negative public comment. It was a world class event and one which will leave a lasting legacy in Cornwall for years to come.

In his years of service Devon, Cornwall and the Isles of Scilly has remained one of the safest of 43 force areas in the country.

I am now engrossed in one of my most significant tasks – to find a successor that will be able to lead and inspire confidence for the next chapter of policing in Devon, Cornwall and the Isles of Scilly. Fortunately I will be assisted in this task over the next couple of weeks by panels of experts, partner agencies, members of the public, and our Police and Crime Panel.

For now though, we wish Mr Sawyer the very best of luck for whatever comes next.