Have your say on police numbers

In her latest blog, Alison talks about police funding and investing in front line policing. 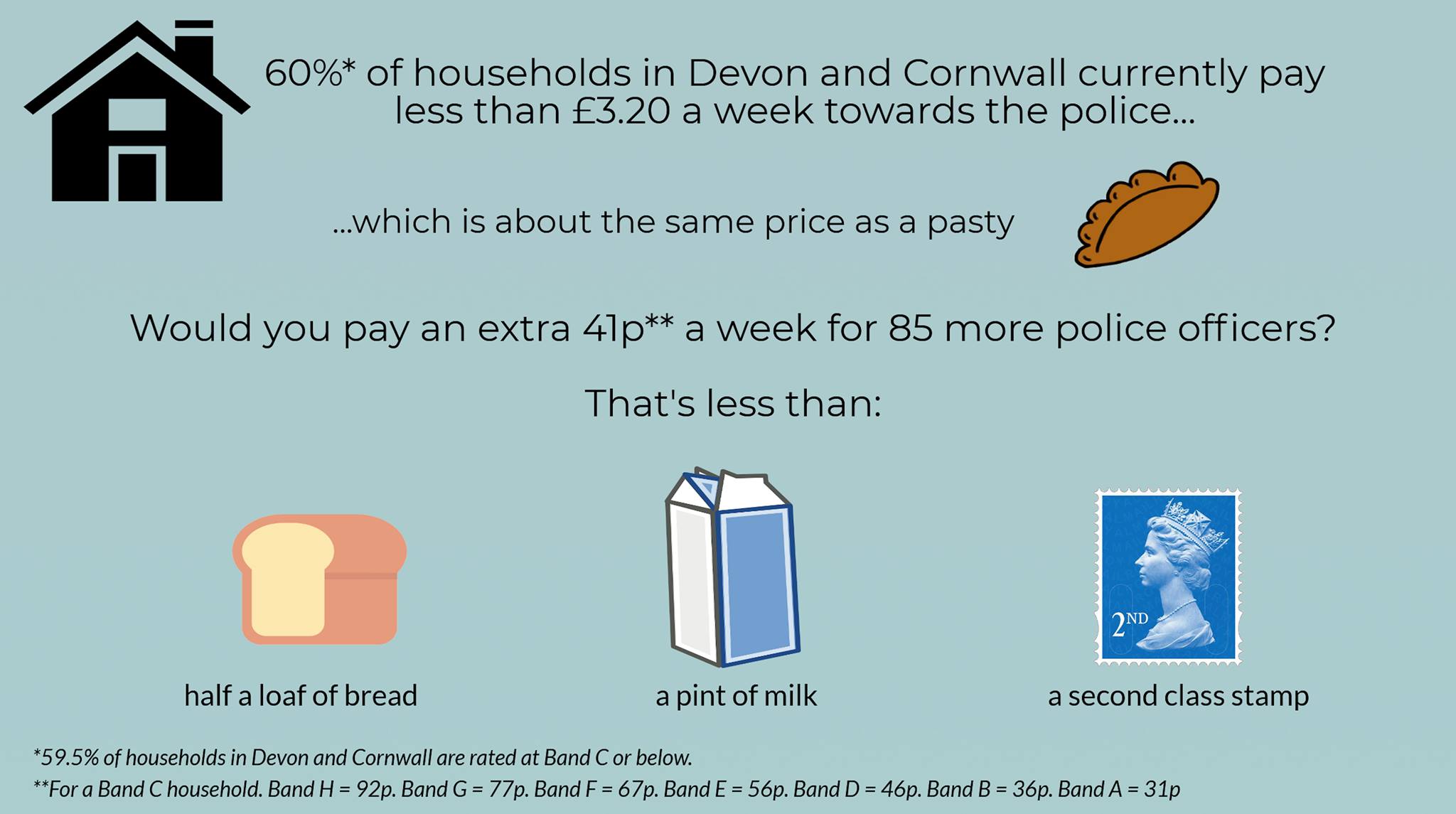 In Devon and Cornwall last year two out of every three households* contributed less than £3.20 a week** towards the cost of policing this beautiful place in which we live, work and play.

For less than the average cost of a pasty every week this contribution provides about 37% (£114m) of the funding the police need to help communities beat antisocial behaviour, to catch criminals, to keep our children safe and to protect the most vulnerable in our society. The remaining 63% comes from central Government funding – in Devon and Cornwall this equates to about £178m.

Last year I decided to send a leaflet to every household in Devon and Cornwall explaining how they contribute towards police funding because I don’t think most people equate paying council tax with paying for the police. I will take my proposed budget for 2019/20 to the Police and Crime Panel in early February and once it is agreed we will produce another leaflet which I plan to deliver along with household council tax bills.

It is important we understand how we fund the police and, it is important that each year I let you know the level of service we can expect from our police force with the funding we can make available to the chief constable.

When I work with the chief to set the budget we consider the business as a whole – things like inflation, pay rises, pension and National Insurance contributions, contributions to national police projects alongside of officer numbers, IT, equipment, vehicles, estates and facilities.

It is at this stage that the work I and my team have done during the rest of the year to test the public’s pulse, gives me an understanding of what people think about the police service they receive, what needs improving and which communities need more support.

In December each year the Government tells us how much it will contribute to police funding and then I can weigh that up against the chief constable’s needs, work out the total amount I plan to ask the public to contribute and start a conversation with us all about why it is necessary.

Last year over 70% of people supported my plans for extra investment in the force and for an additional £12 a year we made great strides forward delivering:

Now I am asking the public to back me again because I want to support the chief constable’s proposals to recruit an extra 85 police officers, bringing officer numbers up to 3,100 by the end of 2020, the highest number of officers since the old Police Authority voted to cut officer numbers to 2,815 in 2012.

That means the chief constable can recruit:

And we will deliver that for just an additional 41p a week*** paid through council tax - less than the price of a second class stamp, less than a pint of milk, less than a bag of crisps.

This will be boosted by the return to front-line policing of 30 experienced officers which have been released from back-office functions following my decision to not go ahead with a merger with Dorset police.

I am also committed to driving productivity up in the force to use what it has more efficiently and effectively so our community gets an improving service and more funds can be reinvested in the frontline.

Without this increase it will mean halting the recruitment of, and perhaps even cuts to, front-line officers. I know cuts aren’t something our communities want to see. I regularly get told by people that they want to see more police officers, so I am asking people to support this increase.

I’d prefer it if more money came from central government but this is not an option this year. I would, though, really appreciate it if everyone would have their say via my website at www.devonandcornwall-pcc.gov.uk

*59.5% of households in Devon and Cornwall are rated at Band C or below.

If you know into which council tax band your house falls, below is a table which shows how much you will contribute to the police.