17 hours ago
💷Grant funding is available for voluntary organisations and charities across #Cornwall to help prevent anti-social… https://t.co/CKbhx8Vyf8
Follow us

A total of £500,000 has been pledged by the Office of the Police and Crime Commissioner (OPCC) to pay for more ‘bluelight, multi-skilled officers’ after the success of the Community Responders pilot in Devon. 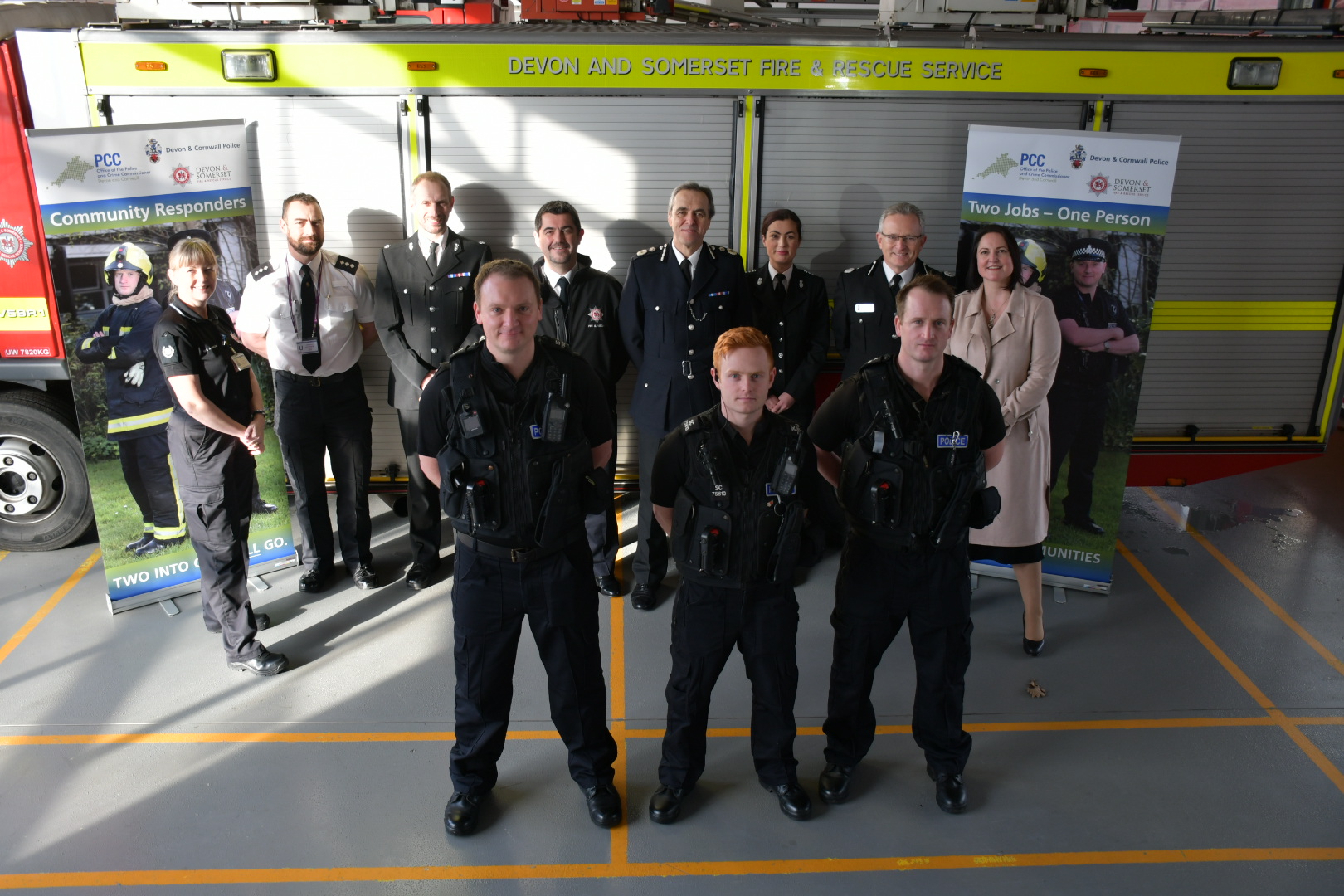 Three of Devon's seven Community Responders met senior firefighters, the Chief Constable and the Police and Crime Commissioner on Monday

This adds £300,000 to the overall annual budget available to spend on ‘bluelight’ officers adding to the £200,000 that was already available.

After finishing their training, the country’s first community responders will be independently patrolling their communities across the county. The team of seven are retained firefighters that have been trained as special constables who can patrol with full police powers.

They will join Cornwall’s ten tri-service safety officers who are deployed in areas which may not have a full-time emergency service presence and are a collaboration between police, ambulance and fire and rescue services. The new officers will be known in the future as Emergency Service Collaboration Officers.

The joint initiative between the OPCC, Devon & Cornwall Police and the Devon and Somerset Fire and Rescue Service places community responders in seven locations in Devon where there is an identified need based on risk, vulnerability and harm - Cullompton, Crediton, Totnes, Dartmouth, Honiton, Okehampton and Newton Abbot.

Each Community Responder has been provided with electric bicycles funded by the OPCC which means they can patrol a wider area and still be within five minutes of their home station.

Police and Crime Commissioner Alison Hernandez said: “The project has been an overwhelming success and I am delighted to pledge another £300,000 in my draft budget to fund further collaboration. This initiative has been created by working with other emergency services, principles which sit at the heart of my Police and Crime Plan.

“I am passionate about bluelight services working closely together and this uplift of additional officers is an affordable way of achieving this ambition. This is a unique project and a national first combining the skills of an on-call firefighter and a special constable in to a single post. Community responders will help better connect with the public and deliver joined up prevention activities providing an improved service to our communities keeping everyone safe.

“Whenever I’m out and about speaking to residents, they all express a desire to see more police officers on the street who know their local communities well. Community responders are able to patrol, remaining within five minutes’ travel distance of their fire station so that if required they can report for duty promptly.”

Chief Constable Shaun Sawyer said: “This is a further investment by the PCC who has supported the Force with this innovative approach, alongside our Bluelight partners in Cornwall and Devon.

“This initiative has produced an approach which equally serves local communities whilst ensuring best value for money for local taxpayers.

“This is a highly innovative approach to the Special Constabulary, working with DSFRS These are professional individuals committed to their communities, working across multiple public service systems. There are further opportunities with our partners, particularly within the coastal and marine sector, and we look forward to discussions with them with this new investment available to build a sustainable response within our communities.”

Chief Fire Officer Lee Howell said: “We’re delighted to work with our colleagues from the police on this joint initiative which will help us retain our on-call firefighters and provide a reassuring presence on the streets.

“We work closely with the police at incidents on a day-to-day basis and it makes sense to share resources in other areas, particularly where we can keep the public safe and prevent incidents from happening in the first place.”

Marc Kastner, Chief Officer, Special Constabulary, said: “These ground breaking new roles show how well emergency services can work together and I am pleased that the PCC has pledged further funding. Combining the skills of a special constable and firefighter mean that we can be more visible in communities making the public feel safer.”

One of the main benefits of the community responder role is having people in post who know their communities well; who can identify both the vulnerable and those likely to commit crime.

So, when Crediton’s community responder Liam Lowey received a ‘tip’ that one of the town’s well-known characters had not been seen for some time, he and a PCSO colleague decided to pay a visit.

As a retained firefighter each is required to be on call and within five minutes of their base station for 21 hours a week – since being trained by Devon and Cornwall Police they can now spend that time patrolling the town as a special constable.

It is that versatile use of dual powers that can a big difference to the communities they serve – and in this case could quite literally have saved a life.

Liam and his colleague used their police powers to enter the man’s flat – it was on the ground floor in a block of around a dozen residences – and discovered that he had carried out a series of modifications to the property.

This included extensive DIY electrical work and, unusually, partial bricking up of internal doorways from the top down so they were required to duck quite low to move between rooms.

“When we knocked at the door the chap shouted to us but was unable to immediately get to the door,” said Liam, “When we did get in, what hit me immediately was the substantial modifications he had made. It was clearly not a suitable environment for anyone to live in and represented a danger to the rest of the building.

“My fire training immediately kicked in and I decided to take the initiative to contact the fire service’s safety scheme and an inspection by the council – his landlord.

“I also upgraded the fire service response protocol to this address so there would be an increased response in an emergency.

“I did this without the chap’s permission as I felt that it was vitally important for the safety of the individual and others living in the building.”

This intervention has resulted in the man getting increased social and homing support – it was clear to Liam it was not in anyone’s interest for his existing arrangements to continue.

But, just as importantly, it means that others living in the block are now much less likely to become accidental victims.