18 hours, 36 minutes ago
Thanks to funding from this office the Police Enquiry Office is now open six days a week. You can now speak to an O… https://t.co/yVho0BPDe1
Follow us

Proud to show off incredible new stations to our communities

In her latest blog, Alison talks about the new Exeter and Liskeard police stations. 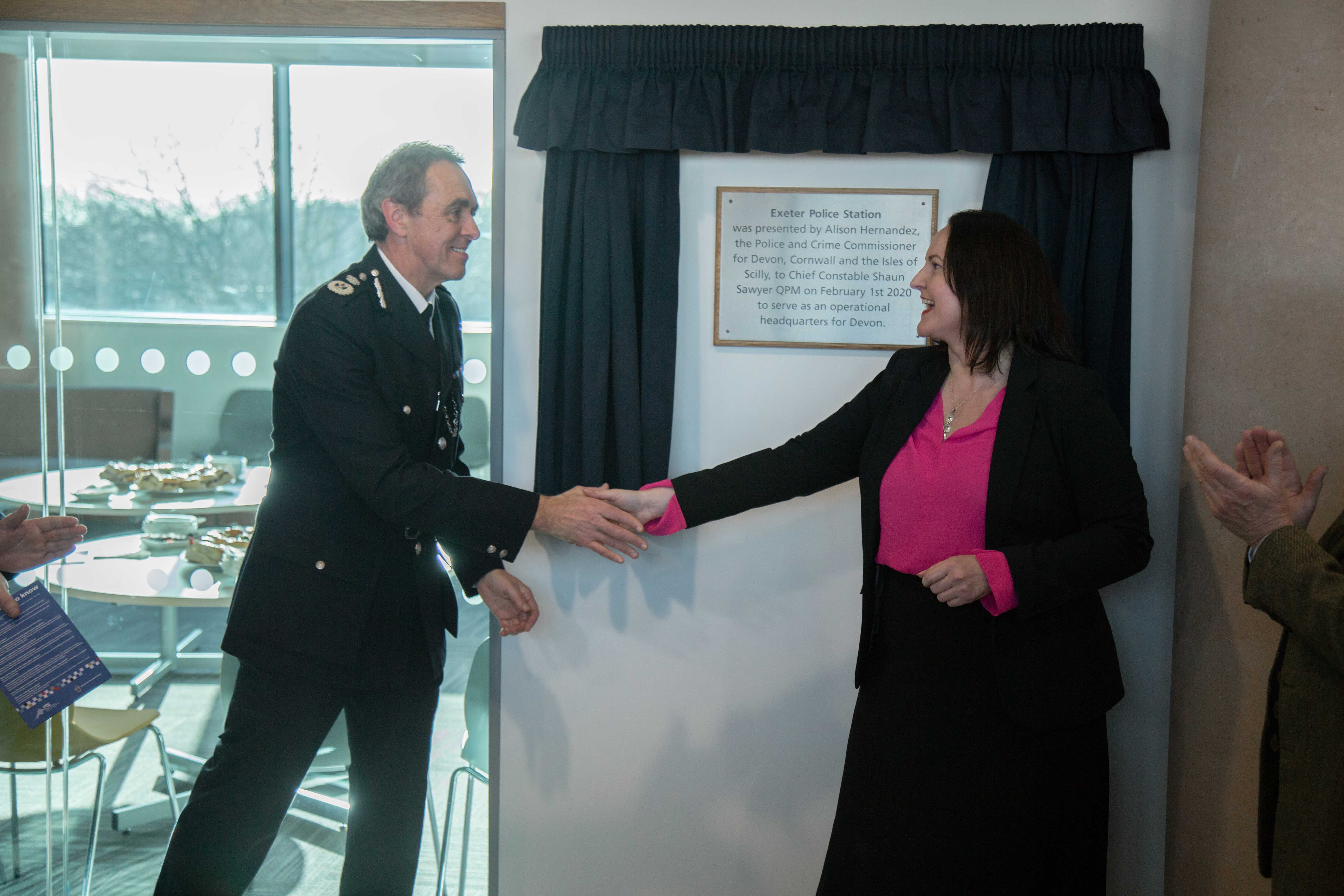 On Saturday I proudly hosted two events where members of the public and those who helped design and build them were invited in to look at our brand new police stations. In Exeter and Liskeard, the new buildings represent a significant investment of over £31 million in the police estate, with most of that money going to outstanding local construction companies.

Attended by contractors, police officers and members of the community, including volunteers, councillor advocates and police cadets, I officially handed over the Exeter station to the Chief Constable in the afternoon after the official opening of Liskeard police station in Cornwall. It was fantastic to be able to show people what had been delivered, on time and on budget, and everyone was very impressed by the new buildings and the facilities available.

Giving the green light to these major projects is one of the first decisions I made after I took office and I am delighted to say that the stations are truly exceptional, sustainable buildings and will help to deliver policing that is fit for the 21st century. They should help residents be safer and better connected to the police - a key part of my police and crime plan.

Everyone has worked very hard to ensure that what we have gets the best out of the police and I would like to thank those officers and staff who have helped shape the new stations and their facilities to ensure both buildings are fit for purpose. Their input has been invaluable and has resulted in new stations that feature modern and spacious working environments.

Exeter now has a much improved public area and public enquiry office while Liskeard, which is open to the public by appointment only, now has excellent, state-of-the art facilities which I am certain will help boost staff morale.

We tried to keep disruption for everyone to a minimum during both builds and measures were put in place to ensure minimal impact. I would, however, like to thank the local communities, in Exeter and Liskeard and staff and officers onsite for their patience and co-operation while the work was taking place.

Built by contractor Wilmott Dixon and located on Sidmouth Road, next to the force’s Middlemoor headquarters, the Exeter station is arguably Britain’s most environmentally friendly police station and is certainly one of the most sustainable buildings in the country. At around 8,000 sqm, it is the largest construction project that we have undertaken.

I am also proud that a total of 78% of the project spend has been within 50 miles of the build in Exeter, meaning the project has significantly boosted the local economy.

One of the main aims of our estate’s strategy is to modernise working practices and reduce the carbon usage of the force while redesigning new buildings in a more cost effective way making better use of space and greener materials.

The new stations were built with this in mind with open plan work environments, improved welfare facilities and stringent thermal efficiency standards designed to maximise natural light to keep electricity to a minimum.

The standalone station in Liskeard on Greenbank road replaces the existing station which was built in 1968 and had structural issues. Built by contractor Ryearch Ltd, it will be a base for up to 70 officers and staff and is situated next to the Cornwall Fire, Rescue and Community Safety Service and South West Ambulance Foundation Trust.

Exeter’s station will be a base for up to 500 officers and staff whose duties range from community policing to major crime investigation. A state-of-the-art custody suite will provide 40 police cells and additional facilities such as access for solicitors and interview rooms. Some cells are also fitted with life signs monitoring equipment cameras to ensure those in police care are safe. The new public enquiry office will open to the public at 8am on 22nd April.

Exeter’s existing police station in Heavitree, built in 1968, was no longer fit for purpose for staff, victims or offenders. My office is currently working with Exeter City Council to develop plans for the site in line with the city’s ambitions.

So what’s next for the police estate? This year our focus will be on the re-building of Camborne police station and the redevelopment of Okehampton police station later in the year. Both Exeter and Liskeard stations were a significant part of our programme and prove that with a clear vision in mind, our estate can be transformed with new police buildings, delivered on time and in budget, that are fit for 21st century policing.