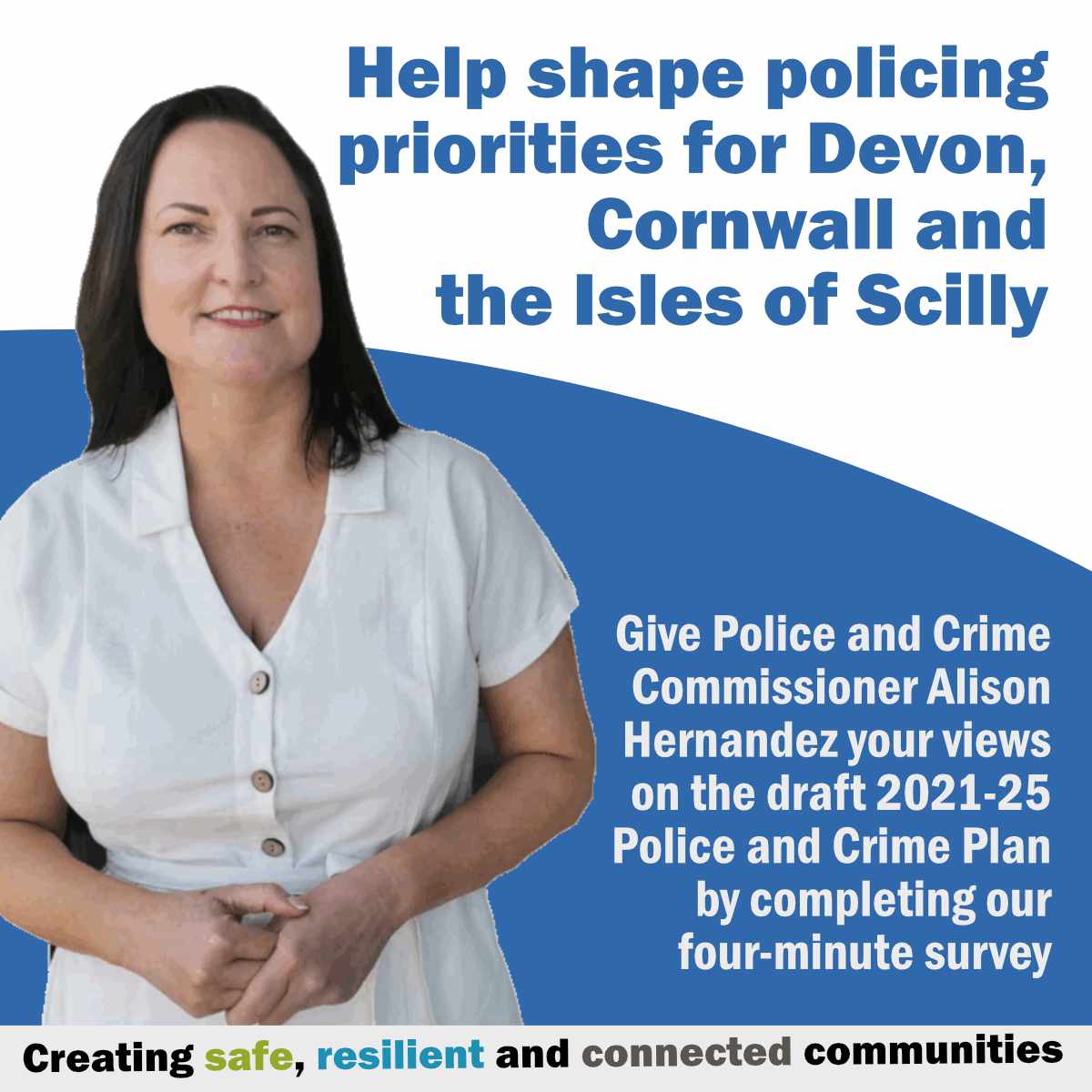 I want to start this week with a big thank you to those who have taken the time to give me their feedback on my draft Police and Crime Plan.

This is a key document for all police and crime commissioners as it sets the objectives, priorities and direction of travel for how I will hold the Chief Constable to account and the work of my office in my current term.

Public feedback is essential in developing my plan and it genuinely makes a difference and helps to influence how resources are allocated to those things that  matter to communities which help keep people safe.

My new plan is ambitious and builds on my previous objectives of wanting to achieve safe, resilient and connected communities. With your support I want Devon and Cornwall to be even safer and an area served by a world class police force.

It is designed to keep communities safe by breaking the cycle of crime through prevention and innovation, focussing on community priorities such as use of drugs, antisocial behaviour, road safety and violence.

I want to maximise visible policing and reduce opportunities for people to reoffend, while providing timely support to victims to help them recover.

Over the past four years my office has continually sought community views on policing in a bid to gauge if the priorities in that first Plan have been effective.

So, this new Plan has been drafted with the concerns of our communities at its forefront - alongside evidence from Government and other partners.

Most of the responses we have received so far, as with most surveys these days, have been completed online - but my engagement team has been able to meet people face to face at events like Honiton Show, Plymouth Pride and Cornwall Cultural Festival.

We have also worked hard to capture people with all different backgrounds and abilities such as our learning disabled community.

The survey only closed on Tuesday, so my office has not yet fully analysed the results.

Provisionally, it appears preventing serious violence was deemed the highest community priority by the majority of respondents. Tackling anti-social behaviour, reducing the harm caused by drugs and improving safety on our roads are also considered of high importance.

The survey outlined 15 areas where I specifically wanted the public’s thoughts – reducing anti-social behaviour, preventing young people becoming victims of crime, reducing the opportunity for people to re-offend and reducing drug activity received the most support among those 15 but the results show all are supported by the public as being either ‘fairly’ or ‘very’ important.

Surveying can also show an organisation where it needs to do more work to help the public understand the importance of delivering a rounded service and influence decision making.

In this case fewer people felt it was important for the police to be more representative of the communities it serves, to reduce business crime and to increase community participation in policing. These all play an important part of the draft plan and it is my intention to do everything to educate the public why that is the case.

I will be taking time to analyse the results in more detail over the comings weeks and use them to finalise my Police and Crime Plan for 2021-25 prior to it being published. Then the hard work with police and partners to deliver on its objectives begins.

Teamwork is an essential part of how public safety is achieved and my office and the police collaborate across a wide range of areas of business to get the best value for the public.

One of the ways we achieve this is collaborating across the south west region with other police and crime commissioners and chief constables.

I would like to express my congratulations to Philip Wilkinson who was last week elected as the new Conservative commissioner for Wiltshire.

Although Devon and Cornwall Police does not share a border with Wiltshire the two forces join Avon and Somerset, Gloucestershire and Dorset as members of the South West police region.

The collaboration brings together, directs and co-ordinates a diverse range of regional collaboration projects such as forensics and special branch,  which have been invaluable in recent weeks in helping us support the investigation into the tragic loss of life in Keyham, Plymouth.

My thoughts remain with the families, friends, communities and police officers and staff who have been affected.

My office is continuing to provide support to anyone affected by this terrible incident or any other, and anyone who needs help can contact Victim Support, 24 hours a day on the phone at 0808 168 9111 or over webchat at www.victimsupport.org.uk.